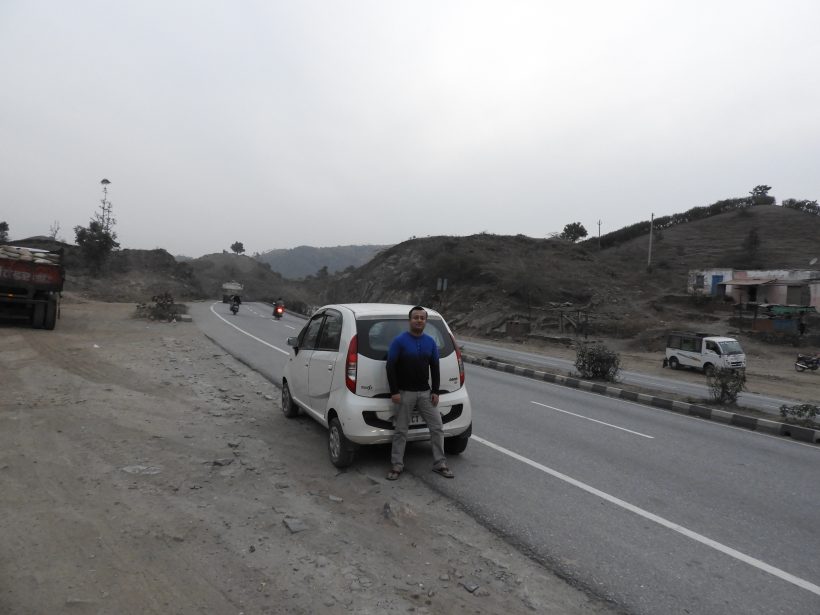 Would you believe, if I say that I flipped the coin to choose from either  Goa or Northeast, right before going on a Road Trip from Delhi to Goa. (Laugh out loud)!

Some Quick Facts of this Delhi to Goa Road Trip:

I started my journey from Delhi, took the usual route Dhaula Kuan to NH 48 and stopover after 200 KM of drive at Hotel Highway King on NH48 to have a quick bite. I was hungry but there is a serious issue with me, if I will eat heavy meal then I could barely steer for long. Hence I placed an order for only 1 Paneer Parantha. By exceeding my expectations they served me a big parantha, which killed all my limits to drive for that day and right after 500 KM’s, I decided to take a halt in Chittorgarh Instead of Udaipur. I checked-in Castle Narela, Chittorgarh. It’s a beautiful budgeted 3* resort cum motel located at a distance of 1KM from main highway. Total distance I had covered on the day 1 was only 596 KM’s.

Next morning, I was fresh and energetic, started my engine at around 02:00 PM.

The breakfast can’t be anything else other than authentic Rajasthani “Dal Batti”, so I stopped at dhaba where they served the Dal – Batti – Churma in a different style. Owner of Dhaba came with a smile and said “bhaiya ji Churma khaiye humara” and I opted for it! I think after so long I had that much desi ghee in one meal, around 200 ML. Taste of that meal is unforgettable and so far that was the best!

Quick Tip: Avoid the Udaipur Bypass till the time it is not fully constructed. It’s more congested in the daytime as compare to the traffic condition of the main city.

After crossing Udaipur, you will see the most scenic and beautiful range of Aravalli. Hills containing natural minerals are lying on the both sides of the road and small lakes you would find every 10-15 KM’s. If you are crossing this section, you might want to get down to click some amazing shots of roads but don’t stay outside for long as these minerals are in the air which may cause uneasiness to you after ½ an hour.  Villages Kids might want to talk to you for a while, enjoy the kittenish conversation however please avoid any offerings to them as they are getting used to with these offerings.

After 120 KM’s of drive I entered in Gujarat and all of the sudden everything was changed. People got different language, food, dress and even looks.

Quick Tip: Avoid taking the route “Shamlaji – Himmatnagar – Ahmedabad – Vadodara” and always opt for Shamlaji – Modasa – Godhra – Vadodara. This route is shorter in distance, the road condition is superb and no toll taxes are applicable since this route comes under state highways and Gujarat State Highway don’t collect any Toll Taxes from Cars. Only limitation on this route is that it doesn’t offer so many options for food until you reach Vadodara.

After entering in Gujarat, I saw Jay Bhavani outlet on my right hand side at Modasa and I stopped immediately to grab Vadapav and Sing Slice (Butter on White Bread with some spicy peanuts on top of it). Their Vada Pav has a unique flavor plus they pan-fry the bun with butter which brings more crispiness in taste. Here I learned that eating raw cheese on top of any bread is as tasty as when it’s cooked. Jay Bhavani is a famous chain-restaurant of Gujarat which serves Vadapav, Dabeli, Sandwiches, Pizza, Maskabun, sing slice and few south Indian cuisine. In 2015-16, I had stayed in Ahmedabad for around 6 months and in the last 3 months of my stay it became my habit to visit Prahlad Nagar outlet every evening. I had tried almost all everything in their menu and still can’t resist to visit again. I hope they will open their outlets in other cities and states as well.

Drove another 200 KM’s and just before reaching to Vadodara I stopped at a Dhaba where I ordered “cheese butter masala” with roti… yes you’re guessing it correct, I booked the room in Vadodra (laugh out loud). Wait, have you heard of this Cheese Butter Masala Curry before? No? Put this item in your list and try it whenever you are coming to Gujarat. Before reaching to my hotel, I also went to Ratri Bazaar in Vadodra where I had…aaa….I don’t remember (ha ha ha). I think you forgot, I am half asleep.

I would like to add a negative note for Sayajiganj Area and Hotel Jalsagar. This is a shady area in Vadodara where none of the hotel owners are taking you seriously. Same thing happened with me in Hotel Jalsagar where first they gave me a room which was NOT even looking like as per the pictures shown in all the travel sites. They always give the same excuse to all the travelers that pictures we saw belongs to a premium room which we can’t even book from any site. Hotel Staff and Bell Boys are so rude and they were even ready to fight with me. Their room stinks and were dirty! One can’t stay here. Don’t fall for their cheap rates because in the end you are paying more than the worth of their rooms.

Ufff… Around 11 AM I checked out from Hotel and went for the breakfast; “Fafda with Kadi” and continued my journey. After crossing few KM’s, I start hopping at various food outlets which were new to me like; Por (light and health snack comes in the form of Peas) and;

Also, I stopped at Chocolate factory of Schmitten.

Quick Tip: Get your Tank Full before entering in Maharashtra, In Gujarat you will get Rs 7-8/liter cheaper petrol as compare to Maharasthra (As per Jan-July 2018).

I continued my journey and entered in Maharasthra at around 8 PM and faced huge traffic jam before reaching to Thane. There I crossed Thane around 12:00 AM and I entered in Konkan region via NH 66. After entering in Konkan, had the PavBhaji on local dhaba at around 12:30. Drove another 60-80 KM’s and stopped at a Dhaba to take a nap at around 02:00 AM.

Good Morning! I woke up at around 07:30 AM and start my day from that point (unknown location). I was still 425 KM away from Goa. I stop-by at a Dhaba where they allowed me to get freshen up and have a bath.

Quick Tip: If you can sleep in your car, there is no need to spend on Hotel Rooms. Showers / Washrooms you can get it on any roadside dhaba’s / restaurants.

It’s time to have the third variety of breakfast in my third state; Maharashtra. I had ordered almost all the options Vada Pav, Misal Pav, Kanda Bhaji at Nirmal Vishranti (slurp). They had served very hygienic and tasty food.

I always suggest everyone to avoid the national highway’s and take this Konkan route to see natural beauty lying within this route. I had invested enough time at every spot, view point, lakes and food outlets. If you are traveling in summers, have some varieties of Mangoes as Ratnagiri district is worldwide famous for varieties of Mangoes.

Quick Tip: Coming by Road and if you are staying in North Goa. Take the right cut towards Ashwem Beach and then where your hotel is located. By doing this you can avoid the toll tax of Rs 250/- applied on every car and fuel for around 25KM’s.